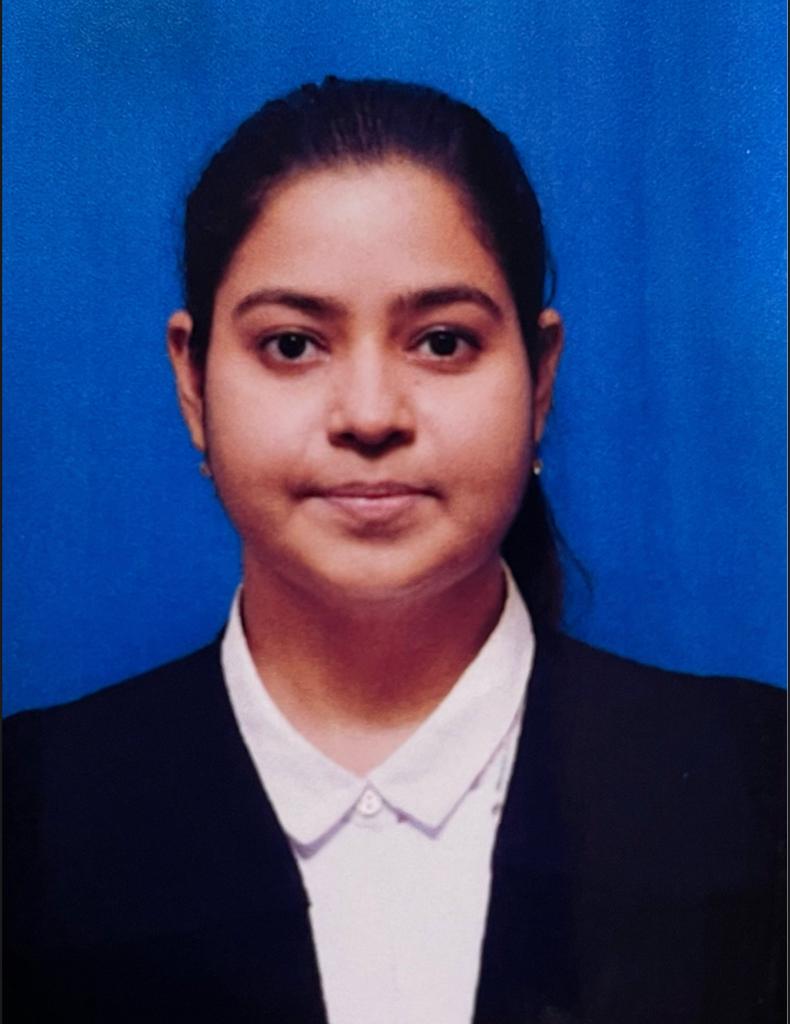 What motivated you to choose law as a career? And how has been the journey so far for you?

It was way back in my school days, when I was introduced to the subject of Civics. The subject itself is so enriching and intriguing. It was then, when I was briefly made aware of our judicial system as well as our fundamental rights, which instilled in me the hunger to know more. Hence, the quest began to learn more, which eventually brought me to a decision of taking up law as my career.

It has been said by many, that follow what interests you and you would never fall back. During my initial days while I was an intern, I ensured that I should get to taste as many genres of law as I can.

However, in the journey, the eagerness to learn more, was lost, rather, it shifted to the idea of having a comfortable corporate job.

But life has it plans and eventually, I landed up with one such firm in my final days of internship which gave me a taste of corporate as well as litigation and this combination not just awed me but also ignited in me the fire of learning, which was lost in the process of becoming a lawyer from a law student. Today, it has been more than 3 years that I am working as an Advocate and the journey of a corporate litigant has just been so overwhelming, that I cannot imagine even a single day without the courts and the law.

What were the challenges that you faced in the beginning of your career?

It is true that beginnings are always tough, but worth the wait. Starting my career as an Advocate in 2019, was no less than a dream.

As we all know that Advocates are generally pictured to be an essential character of a courtroom drama and as other Advocates, I always craved to be a part of it. However, those courtrooms became a flowery dream, when the world was hit by covid. In my journey, the major challenge that I faced was of not getting the essence of being an Advocate for nearly 2 years since the courts during the pandemic became virtual.

The virtual court has its own pros and cons but as an Advocate not going to the courts physically made me miss on a lot many courtroom essentials, as the work was confined majorly to drafting pleadings only. Further, due to work from home, the issue of filing the pleadings at courts became yet another task, hence, the introduction of e-filing was even though a necessary and welcoming change, but was even tougher to execute.

Nonetheless, when the situation of covid subsided and things started taking its shape back to normal, the courts also started physically, and its almost a year now, since I started appearing before the Courts physically, which has brought the Advocate in me back to life and the experience of past one year has been incomparable.

What is the most challenging case you have handled in litigation and what were your learnings out of it?

Litigation means challenges. Every case has its own beauty and with every case I have learnt different viewpoint in which the law can be interpreted. I won’t say that I have faced ‘the most challenging case’ till date, since I am too new to the industry and yet to explore a lot. Yet, I would say that, I have been fortunate enough to be a part of such a team in which we have faced several cases which are different from each other and are a challenge in itself. I am a part of dispute resolution team and I have been a part of the strategy making, wherein I have understood that there is no straight jacket formula to solve all the cases, each of the case have a distinct fact or law which makes the work more challenging. Moreover, I have a core practice in Insolvency & Bankruptcy Code, 2016, which is an ever-evolving law. The Code has seen several amendments over a period of 6 years and with such amendments the challenges pertaining to each case has arisen. Accordingly, the challenges have taught me to be abit more proactive towards the amendments, to be more patient and have perseverance to attain a finality in a case.

Rishika, according to you, what exciting opportunities can corporate litigation bring in the future for the upcoming generation?

The upcoming generation tends to have an urge to “have more in less time”. Corporate Litigation is that genre of law which provides the new gen-z lawyers a platform to have a mix experience of the business law along with the its practical application i.e., having the taste of litigation at the same time.

With the increasing trend of start-ups in the country, there is no escape from Corporate Litigation and it is to be understood that Corporate Litigation not always aims towards court proceedings, but also has the essence of mitigating the risk of litigation in several corporate and commercial dealings by way of client counselling.

With the boom in economy there is no doubt that there will be several business enterprises looking for expansion and restructuring and this also falls under the wing of Corporate Litigation. Hence, it won’t be wrong to state that Corporate Litigation has a lot to offer to the upcoming generation since it is the most modern and trendy genre of law.

How do you ensure that your clients receive the best possible outcome?  Any hacks for the same?

One of the basic principles to provide the best outcome to the client is that you have to be a good listener. In order to provide a suggestion on point, it is very important as a Counsel to hear your Client at length. A patient hearing would not only allow the Counsel to understand the facts clearly but would also help in co-relating the same with the applicable laws and to strategize the whole case. Secondly, which bears the utmost importance is, the communication between a Counsel and its Client which must be transparent and clear.

It is essential that the Client must not hide any facts from its Counsel and the Counsel while taking up the case, if feels that the case is strong only factually and has a weak leg in law, then the same maybe well informed to the Client.

Further, as a Counsel we ensure that our Clients are duly updated about their matters and hence all the developments howsoever small that be, should be informed to the Client in a timely manner. Thus, it is really important as a Counsel to make the Client comfortable enough to share its case and therefore a welcoming environment is must and necessary in order to retain the Clients.

Rishika, is freelancing worth doing in the legal profession and if yes, how to master the same?

Personally, what I believe is that, freelancing in the initial stages of the profession is a sheer waste of time and is a strict no-no for me, as it involves a lot of struggles for a newbie. However, one can very well be a freelancer after spending a sufficient amount of time in the industry.

To master this art it is essential for one to showcase the market your USP and once people have known you because of your knowledge, you build good connections and then it is way easier to be a freelancer.

How useful do you think the idea of Metaverse would be in the legal industry?

Honestly, what I believe is that Metaverse is a whole new concept in itself and this sudden change of everything from physical platform to virtual platform is not an easy change to be acceptable by all especially in the legal industry. The idea of Metaverse may sound very fascinating and may be a time-saving one, but for me these are dreamy and may have serious repercussions.

It won’t be wrong to say that till date we have no stringent check and balances for securing the privacy and confidentiality of social media applications as there are serious questions which are still unanswered when it comes to protection of the data of an individual.

Hence, it might happen on the digital platforms that the privileged relationship of the advocate and client is violated as the privacy is at stake as there exists no regulatory forum for such virtual universe. Therefore, it is true that things are changing rapidly in the intent to achieve a digitalised world but we are missing out on basic essence and enjoyment of everything at its pace.

What are your thoughts on the frequent amendments that are brought under the IBC every now and then?

Basically, amendments in a law showcases that, the law is being put to use and is being utilised by the population at large. It is true that laws have to be amended with time so as the same is viable enough for the legal system. It is quite imperative to amend the law but doing the same constantly makes it difficult to interpret and implement, as, there have been situations wherein, a case of a Corporate Debtor is pending for approval of Plan before the Adjudicating Authority, and meanwhile an amendment is introduced which has to be incorporated into the Plan and hence, the Plan is to be revised.

This effects the whole intent of the Code as it aims towards a time-bound resolution. It is thereby certain to note that amendments are essential but it should be affected and necessitated only at certain intervals and that too with a proper mention of the nature of such amendment, i.e., prospective or retrospective, as deemed necessary, for the development of the Code.

According to you, what networking strategies should be adopted by the first-generation lawyers specifically in corporate litigation?

It is apposite that, for a first-generation lawyer to make a mark in the industry, it is essential to have patience, perseverance and must be hardworking along with smart work. A first-gen lawyer should mainly focus on networking and building connections.

One can build connections by being a member to a Bar Association, wherein, one gets to meet a lot of lawyers from different genres and further, one should also attend events, seminars and conferences to build contacts. However, mere getting contact is not building, it is important for one to regularly follow-up with the new contacts. Hence, in order to build network, one should be well-recognised and known in the industry and that can either be by way of working or by way of building contacts.

Lastly, any 3 best pieces of advice for our young lawyers?

I have completed merely 4 years (approximately) in the legal industry and I myself is at a tender age in my professional career to advice the young ones. Nonetheless, I would like to share 3 of my basic principles which can benefit the young lawyers and they are:

Get in touch with Rishika Kumar-