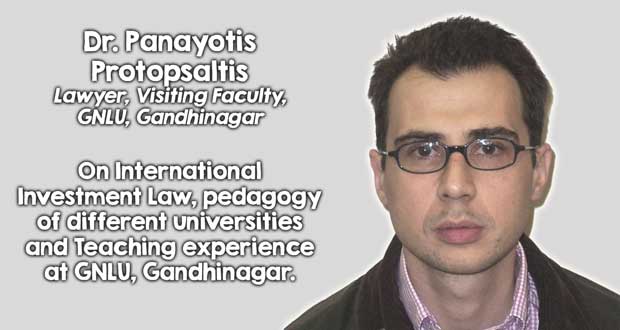 Dr. Panayotis Protopsaltis is a Greek national and he is presently a visiting faculty at the GNLU, Gandhinagar. He is a reputed international scholar having expertise in International Investment, Cross Border Transaction and Dispute Resolution. It has been a great experience meeting him and talking with him at length about the pedagogy of different institutions and universities he has attended.

Conversing with him has been a great experience and almost a tour through many European Institutes, therefore I took this opportunity to share his insights and experience with our readers.

First of all, please tell us a bit about yourself. What is your current work profile?

I studied law at the National and Kapodistirian University of Athens, Greece, at the University of Paris II (Panthéon-Assas) and at the University of Paris I (Panthéon-Sorbonne) from where I hold a doctoral degree in public international law. I have conducted research in the framework of various research centres and delivered lectures at universities in France and in Greece on international investment law. I am also a practicing lawyer, member of the Athens Bar Association. Since the beginning of my career, I was involved in transborder transactions, originally in the introduction of mobile telephony in Greece and subsequently in some major investment projects in Europe and in the Middle East. In the recent years, I have been retained to advise various public and private institutions on international investment law related matters.

How did you decide to pursue law? In India a lawyer is still looked at with caution and doubt, how is the scenario in Greece?

[sociallocker] As is the case with many people studying law, when I graduated from school, I did not know exactly what I wanted to do. I graduated in 1987 and information one could obtain at the time was much more limited than information available today. I decided to study law because a law degree offers tremendous opportunities for work in a number of sectors. Civil service or administrative work in international organisations is one solution, career in legal professions, law professor, judge or attorney, is another. I was perhaps also influenced by a number of family friends that had also studied law. When I began my studies I was fascinated by law and tried to improve my knowledge and skills, nothing else mattered.

I graduated from the National and Kapodistrian University of Athens, the major law school in Greece. Curricula in Greek law schools in the late 1980’s included four years of study and no specialisation. Lectures were delivered to all students, often 250 persons in an amphitheatre, by professors themselves or by their assistants and presence was not compulsory. Professors delivering lectures were rarely asking questions to their audience and vice versa. A free of charge manual was given to every student –usually written by the professor. Of course, there were no moot contests and student exchange programs, some students participated in small working groups and could present their work but this was the exception rather than the rule. Some exams were particularly difficult to pass and students had to sit twice or even more.

Lectures were delivered in Greek and focused on Greek law but law school libraries have impressive collections of German, French and English books. This is because most professors had studied in Germany (private law), France (public law) and in the UK and the U.S.A. and a number of professors of Greek law schools hold permanent posts also in other European Universities. Greek students were therefore in close contact with European and U.S. bibliography.

You earned a Masters and Doctorate from University of Paris. How was your experience there?

I had already completed my vocational training at the Athens Bar Association and I was a full time lawyer in Athens but I was always interested in international law and in research. I therefore decided to enrol at the LLM of international economic law at the University of Paris I, recommended to me by one of my professors. Depending on the subject Germany, France and the UK were the normal destinations for young degree holders wishing to pursue further study.

I did not know what to expect but found instead the good old continental model but students were now expected to do research on their own and actively participate at lectures. I was admitted for a research degree and so completing a doctoral thesis was ultimate aim. Doctoral research was long and slow, in France students rarely completed their thesis in less the five years and were working as assistants at various universities or managed to obtain posts in international organisations. A limited number of students gained scholarships and I was one of them. Doctoral research was therefore undertaken only by a limited number of passionate students.

Interestingly enough, the French government at the time gave incentives to students to pursue further studies. This was because France had high unemployment and young people could not be absorbed by the market. Many unemployed chose to pursue further studies. This created a market for academic services, the need for more university professors and a generation of very well educated people.

I benefited a lot from my stay in France. Along with my work on my doctoral thesis I had the opportunity to meet with some of the most important authorities in international law, participate in research groups and conferences, gain experience in teaching, to be involved in the work of international organisations and to some major international projects. I also benefited from the cultural events, museums and lectures on history and art, so abundant in Paris.

You speak German, French and Turkish apart from Greek and English. How do languages help in your work and what are the difficulties in learning in a foreign language?

I learned English and French from a very young age, it was very common -and still is- in Greece to learn two or three foreign languages and master them by the age of 18. I learned German and Turkish later on, as a university student. I made the effort to learn because languages are one of the most useful tools in everyday life and in academic research in Europe. Monolingual academics are usually at a great disadvantage.

Students should not be afraid of studying abroad in a foreign language. First of all, their presence in the foreign country will allow them to acquire easily the necessary linguistic skills for communication. Then, post-graduate studies will learn all necessary legal terminology but as they have already read law, it will be easy for them to understand the corresponding meaning. Then, they may also seek help from native speakers. Foreigners at the beginning are of course at a disadvantage compared to native speakers but rarely post-graduate students fail solely because of poor linguistic skills.

Would you recommend your students to pursue Masters and doctorate in continental Europe?

I think Europe hosts some of the best universities of the world and students have a lot to learn from their presence there. Not only they will benefit from interaction with some of the most renowned academics of the world but they will also see a different way of work and approach to scientific problems.

Continental universities follow a different system based on students’ responsibility. In that, the university differs from high school, students are given limited guidance, they are required to work on their own. Continental universities still favour theoretical analysis over practice and studies are not job-oriented, this is the essence of European academia. A drawback is perhaps that inter-disciplinary studies are not so common.

What attracted you to research in international investment law? 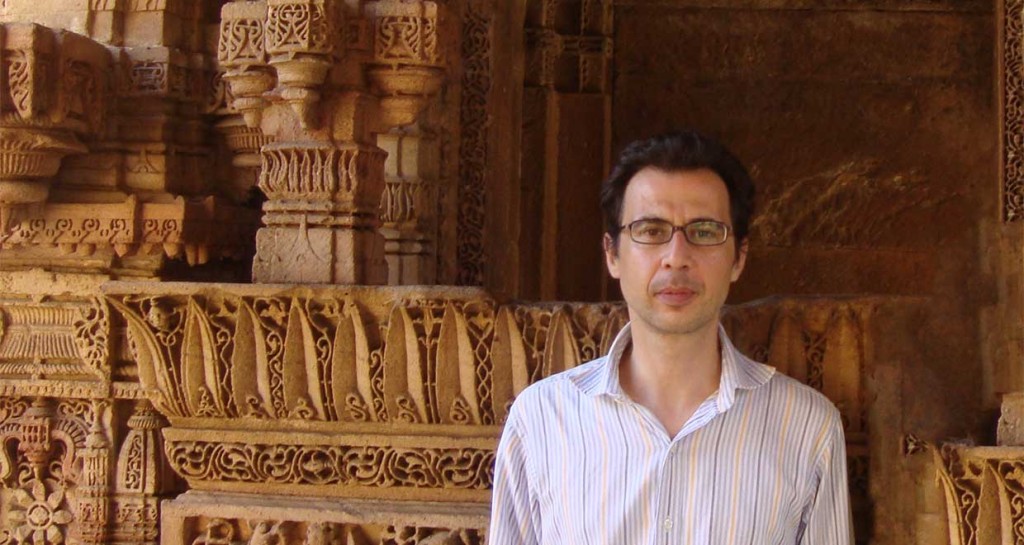 How has your experience in India and GNLU been so far?

I came to India for a short visit two years ago, liked the country and wished to learn more about its institutions and its people. The invitation at the GNLU was a formidable opportunity for me to see Indian academia and meet with Indian academics and students. I delivered two courses, on the law of multinational enterprises and on international investment law and I am very happy with the interest that my audience takes on the topics.

Students may be indifferent or disinterested in the subject being taught. How do you deal with these and revive interaction among students?

Your question assumes that professor has to do something for indifferent or disinterested students. Well, I am afraid this is not the case. First, because there are always indifferent or disinterested students at class. Second, because, assuming that students have chosen to study law, they should be interested in the subjects being taught. Third, because students’ duty to learn does not depend on professors’ performance. Students cannot use professor’s poor performance as an excuse for not learning. There are other procedures to sanction professor’s poor performance, if there is one.

I think that the professor should prepare himself to deliver a lecture and that the lecture is in some respects like a theatre play, the professor being the actor, the students being the audience. Some jokes and stories may help to attract students’ attention, participation of students at the lectures also but the professor must never turn lectures into a discussion forum. Academic conferences and research groups offer many opportunities to students to interact and express their opinion. I also believe that some professors are more inspiring than others but, alas, there is no objective criterion for that. I finally think that we all have to suffer from boring speeches or speakers if we are to learn how to make our lectures interesting.

What would be your advice to students on performing well in academics?

Performing well at university requires understanding the system of academic study. Method of reading, exercise in legal writing and interaction with other students and professors in the academic community are very important. Now some students obtain better marks than others. This may be due to a number of factors, insufficient preparation, failure to understand, failure to express themselves, to name just a few. Students have to learn from their errors and correct them. Yet, the key to success is, I think, genuine interest. Genuinely interested students are always very successful at university because they do a further effort for the sake of learning and adopt this inquisitive approach to problems which is a prerequisite for academic excellence.