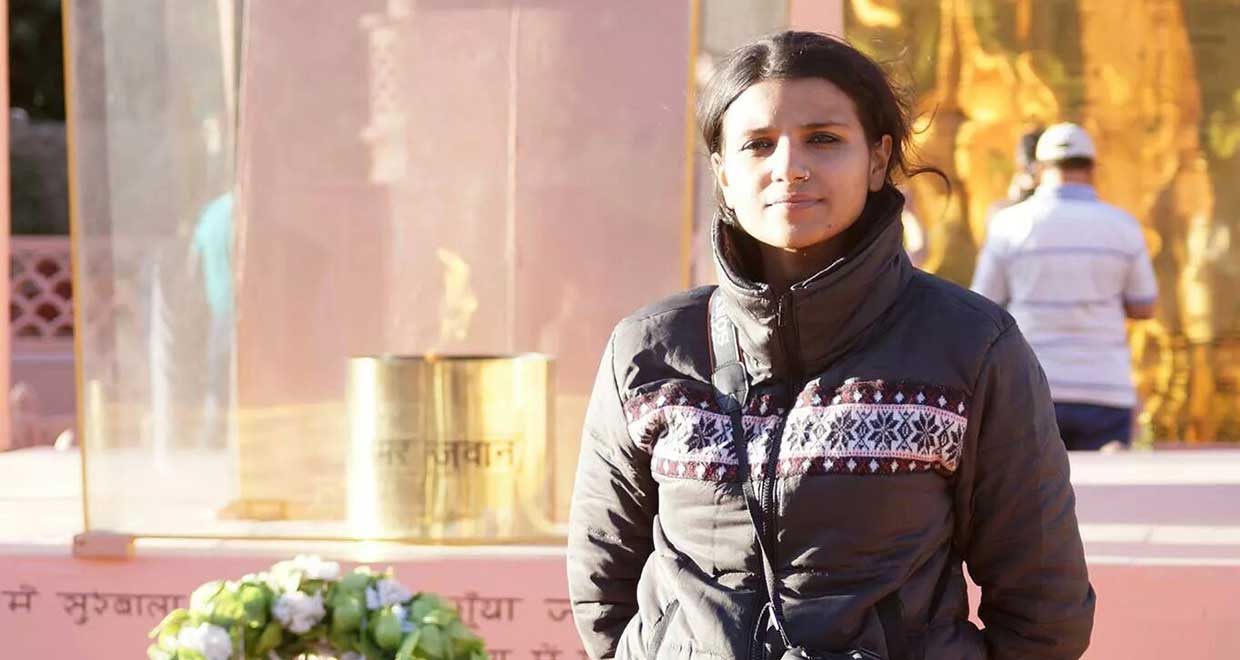 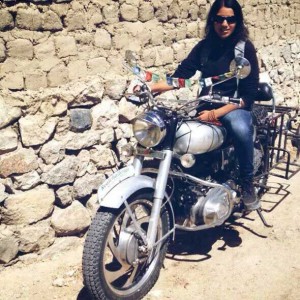 Shreya Sood graduated from RGNUL, Patiala. She has cracked the Services Selection Board exam and is all set to join the Indian Army.

What motivated you to join the army?

To answer your query, I must say that I have always been a big fan of the Indian Armed Forces from a very young age. I always admired what they did. The tales of raw courage and valour, courtesy the media, on war anniversaries or books, struck a chord within me from an early age itself. The Olive Green became a dream. A long time back, I used to say to myself that wouldn’t it be great if I could be an Army officer? Then I realized that there was no reason that I couldn’t be one! And moving ahead from admiration, I decided that I would opt for the Army as a career when it was time for me to make a choice. A big chunk of my life is related to this. I was an athlete throughout school, but got distant from it while doing law though I did stick to a bit of volleyball. I love travelling, writing, and aviation. My ultimate goal in life is to be of some use to my country, because I am one of the privileged who had access to the best education and resources possible. I am not guided by jingoism, but simply by a sense of responsibility towards India.

Doing law had more to do with practicality than a direct interest in spite of having a grandfather who was a judge, an uncle who is a lawyer and a brother who is the Founder/CEO of the Be More America movement. I wanted to have a professional degree as back-up in case my plan of joining the forces didn’t work out. However, from my very first week in law school, I got hooked to law. I enjoyed every semester thoroughly. Apart from academics, I devoted my time to writing papers, extra reading, volunteering for college events and even a couple of moots. I was always amongst the top ten of my batch. Its necessary for me to dispel the flawed logic of only those joining the army who are weak academically/unaccomplished.  All in all, it was an enriching and wholesome experience. I am glad I am a lawyer!

Please tell us about your interview?

The SSB interview was the trickiest and the most difficult interview I have ever faced, simply because it is designed to test your reactions under pressure, to poke you, provoke you and delve deeply into your psyche. The interview was on my birthday, and I don’t think I have ever had a scarier birthday! And yet, it was also fun. I mean, how often do you get to talk about yourself endlessly? The interviewing officer asks fifteen to twenty questions in one go, and once he is done, you start answering, depending upon the questions you manage to remember. This cycle is repeated three to four times. My interview lasted for around 40 minutes, and I was dazed by the end of it. (Going into more detail here doesn’t make sense because then it’s going to be a never-ending post.)

I cleared CDSE four times. The first three times, I appeared for the exam simply for the heck of it, knowing very well I wasn’t eligible for SSB. Around this time, I discovered my ineligibility for the flying branch of the Indian Air Force due to crossing the age limit by a mere one day, and this caused an immediate dip in my enthusiasm as I had always wanted to be a pilot. I applied for LL.M to a number of foreign universities, and got accepted at almost all of them- Berkeley, UCL, SOAS, Essex, etc.

I thought I was headed to Europe by September for sure! Then the results of my fourth CDSE exam came out, and I received the letter informing me of my SSB in Allahabad in May. I couldn’t attend it due to final exams in college, and was unsure about the absentee batch in June as I was sure I wouldn’t have my law degree by then. Call it divine intervention or whatever you may, but somehow, exactly a week before the SSB was scheduled to begin, I received my mark sheet, degree and all other important documents from college!

This put me in a frenzy, because a week was simply too less to prepare for something as challenging as the Service Selection Board! I relied solely on the advice of two of my closest friends, who themselves had cleared their respective SSBs with flying colours (one of them will be an officer by this time next year). Coaching was out of question primarily due to lack of time, but I did download some sample psychological tests and tried working on those. I was a nervous wreck and was sure I would be coming home after the Screening test on Day 1 itself. I even made the train reservations accordingly! Knowing that other candidates must have been preparing for months automatically placed more pressure upon me, which in hindsight was completely unnecessary. We have control over our preparation, and should focus entirely on that.

What efforts to you make to stay physically fit and train for SSB medical test?

Physical fitness is as important as mental toughness is one’s physical fitness. In my case, I was exposed to sports at a very young age so running, swimming and cycling were a part of life. Upon moving to Delhi, I started training four times a week in the Israeli martial art of Krav Maga, which was a fantastic workout in every way. Sadly, I couldn’t continue with any of this in law school due to the pressure of its own commitments. I did manage to play a little, and I also completed a gruelling mountaineering course which made me a certified mountaineer. Even if you are not headed into a career where physical fitness is important, you must develop it for your own sake. The old cliché of a healthy mind in a healthy body is actually true, especially in the highly competitive and stressful times of today.

Regarding the fitness for SSB, I made no special effort as I wasn’t even sure about going, but now that I was free from college, I returned to my running and krav and that helped me. Here, I must add that reporting for SSB at the given time might have been doubtful initially, but once I made up my mind, there was no turning back. I approached it more seriously and strategically than I have ever handled anything else, and that alone is the reason why I not only cleared it but got AIR 3 in the final merit list. Good things in life do not come easy, and every major goal needs commitment, dedication and preparation. Coaching or not is only a tiny part of any prep.

How difficult is it for a woman to get into the Armed Forces?

Well, in a society like ours, gender-related realizations come at a dizzying pace. For women to get selected for the army is not much different than it is for men, except that the seats are lesser. The real test lies in proving your mettle to those who believe that the army must stay a man’s bastion, simply because women are not ‘good enough’. And I am prepared to prove that point, beyond any reasonable doubt. I would like to be judged on how I handle the responsibilities entrusted to me, rather than my gender. And yes, people tend to react a little differently once they get to know I am going to be an army officer. It is still not a common career-choice for women to make, I guess. I have been met with respect, admiration, glee, shock and horror. I have heard everything from ‘wow!’ to ‘you are ruining your life’. I met a very senior judicial official of Indian Judiciary on the train back from Allahabad, and he was appalled at my career choice. The whole gamut of reactions the sentence ‘I am joining the Indian Army’ evokes is very amusing!

Tell us about your travelling experiences.

Travelling is in my blood. I used to take a number of road trips with my parents, and as I got older, I started travelling solo or with oddly assembled travel companions. I have traveled the length and breadth of India, along with a few foreign trips. Some of the most memorable experiences include riding from Khardung La to Leh on a bike; getting chased by the police for setting up a tent on what turned out to be forest land in Uttarakhand; and a marriage-proposal from a drunken tourist in Bhutan!

Given a chance to turn back the clock would you have done anything differently from what you’ve done in life?

By nature, I have been headstrong and stubborn. I have often gone and done exactly what I wanted to. Consequently, I have learnt a lot of tough life lessons, just as I don’t have too many regrets at this stage. Therefore, I really wouldn’t want to turn the clock back.  But yes, I wish I had taken TOPA a little more seriously.

My one and only goal as of now is to do justice to my military training that starts next month in OTA, Chennai. I am not thinking of anything beyond that, because how I handle my training will reveal a lot to me about myself, based upon which I shall look ahead.

Given the license to be preachy, what would you like to tell our readers?

Ahaan! Given the licence to be preachy, I want to give a holler to all the ladies out there who have dreams and ambition, but are in doubt. Make your own path. From being a partner in top-notch law firm to a volunteer with an animal shelter, from being a Supreme Court judge to a primary teacher, from being an Army Officer to a nun- IT’S YOUR CALL! You alone must choose your future, and not allow society, peers, friends or foes to dictate the course of your destiny. This isn’t about subscribing to feminism or some other sociological phenomenon. It is about standing up for your own self, and never allowing someone to tell you that you are not good enough for this or that. Only you can truly understand your talent, dedication and drive, so make sure you put all of it towards achieving what you want to achieve, and not pandering to what is expected of you.